I first considered fostering as I wanted a pet, however my partner and I were going on a long holiday in a few months time so a permanent adoption wasn't an option at the time. I enquired with MAR about fostering a cat (or a couple of kittens) because we were renting a place that didn't allow dogs and also I didn't think I was a 'cat person' and therefore wouldn't become too attached to the animal once it came time for them to go to their forever home. 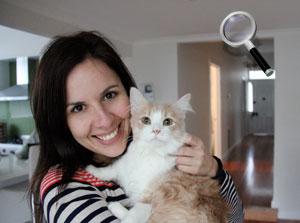 We ended up getting two kittens when they were 5 months old- a brother and sister named Biscuit and Pudding. At the beginning they were very timid but it didn't take long for them to become a part of our family. Pudding took to my partner straight away and Biscuit became my shadow, constantly following me around the house. After 2 months with us Pudding found her forever home with a family that instantly fell in love with her during her meet and greet. It was really hard having to let her go, but I took comfort in knowing she had been adopted into such a loving family and to this day we still get updates about how well she's doing with her new family.

After Pudding, I couldn't bear to part with Biscuit so my partner and I decided we would adopt him permanently. These days we've renamed him 'Freddie Purrcury' and he has well and truly made himself at home. Freddie's still my little shadow but he's taken to Jeff as well and happily sits on his lap or next to him when he's on the computer. He makes us laugh every day when he fetches bits of paper or chases his ping pong balls. It's hard to believe he's the same timid cat that arrived here so many months ago but he is truly a part of our family now and I couldn't imagine my life without him. I'm a converted cat person!

Fostering is such a rewarding experience. You're preparing an animal that might not have had the best start in life for a future of security and love. It's a great option for people who can't commit to a pet for a long period of time. Animals, like humans all have different personalities and therefore no matter what your situation, if you're interested in fostering there might be an animal that's a good match which you could help. Melbourne Animal Rescue have been fantastic in setting our foster cats up with everything they needed to be comfortable and were happy to donate food and litter when needed. It's always been easy to get pet advice on their FB page and I feel like i've come to know many of the other foster carers through the community which has been developed online.

As for Freddie, he spends most of his days stretched out on our sofa watching the pigeons out the window and getting belly rubs from us. Life could be a lot worse!